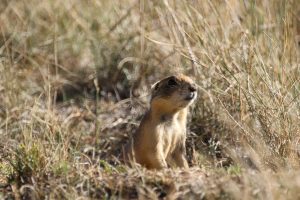 On March 29, in the case of People For the Ethical Treatment of Property Owners v. U.S. Fish and Wildlife Service, et al., the U.S. Court of Appeals for the Tenth Circuit issued a unanimous decision that the Endangered Species Act (ESA) and its implementing regulations can, consistent with the Commerce Clause in the U.S. Constitution, regulate the “take” of the Utah prairie dog, a threatened and purely intrastate species, even when it is located in nonfederal land.

The District Court granted summary judgment to People For the Ethical Treatment of Property Owners (PETPO), a nonprofit organization that was founded by Utah residents, mostly local property owners, “who suffer as a result of the regulation of the Utah prairie dog.” That District Court reasoned that neither the Commerce Clause nor the U.S. Constitution’s Necessary and Proper Clause authorize the Congress to regulate this species when it resides only in Utah, and when it is located on nonfederal land.

The Tenth Circuit emphatically rejected this reasoning. The Tenth Circuit agreed that PETPO had standing to file and prosecute these claims. However, applying the Commerce Clause criteria spelled out by the U.S. Supreme Court in its 1995 decision in U.S. v. Lopez (and employed in other rulings), the Tenth Circuit held that the Congress is empowered by the Commerce Clause to regulate activities that substantially affect interstate commerce, and here the Congress had a rational basis, acting through the U.S. Fish and Wildlife Service, to find that this regulated activity, taken in the aggregate, would substantially affect interstate commerce. The Tenth Circuit referenced the Supreme Court’s 1942 decision in Wickard v. Fillburn for the proposition that even if a challenged activity is local, and even if it may not be regulated as commerce, still it may be reached by the Congress if it exerts a substantial economic effect on interstate commerce.

The Third Circuit reasoned that extending protection to the Utah prairie dog was only part of the ESA’s broader regulatory scheme which, in the aggregate, affects interstate commerce. It further reasoned that, to rule otherwise, and carve out an exception for the Utah prairie dog, would condemn the ESA “to a lingering death” since so many ESA-regulated species exist as “purely intrastate” status.

Finally, the Tenth Circuit notes that all federal appeals courts that have confronted this argument have agreed that the regulation of a purely intrastate species under the ESA is an essential part of the law’s regulatory scheme, and accordingly the Congress had ample authority to regulate ESA-activities on nonfederal land.