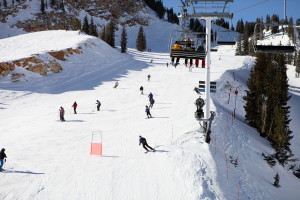 On April 19, 2016, the U.S. Court of Appeals for the Tenth Circuit, in Wasatch Equality, et al., v. Alta Ski Lifts Company, et al., affirmed the lower court’s dismissal of a lawsuit claiming that the U.S. Forest Service, in routinely approving a permit to operate the Alta Ski area in Utah, unconstitutionally discriminated against a group of snowboarders who were banned from using these ski lift facilities by an edict of the ski resort’s operators. Ultimately, the Court of Appeals concluded that “[e]ven if we grant all reasonable inferences in Wasatch’s favor, the pleaded facts at best establish that each year the Forest Service—with knowledge of the snowboard ban—reviews and approves Alta’s site plan and receives from Alta a usage fee. This isn’t enough to establish state action for purposes of the Fourteenth Amendment.”

Wasatch Equality is a nonprofit Utah corporation that is dedicated to “promote equality and harmony among skiers and snowboarders.” However, the Alta Ski Lift Company, which operates the Alta Ski facility pursuant to an annual permit granted by the U.S. Forest Service, has imposed a ban on the use of snowboards at this facility. Wasatch Equality argued that, since the Alta Ski facility requires this federal permit to operate (and the U.S. Forest Service has granted 120 such special use permits), the federal approval which tolerates this ban is a “state action.” It further argued this state action is in violation of the Equal Protection Clause of the Fourteenth Amendment, as applied to the federal government through the Fifth Amendment’s Due Process Clause. According to the complaint, “skiers and snowboarders have harbored animosity and hostility towards one another since the snowboard’s introduction.”

The Court of Appeals agreed with the defendants that the Equal Protection Clause does not apply to this lawsuit because the snowboarding ban imposed by the Alta Ski Lift Company is not “state action,” as measured by the precedents of the Tenth Circuit. The Fourteenth Amendment provides, in part, that no “state” shall deny to any person within its jurisdiction the equal protection of the laws, but Wasatch Equality has not pled facts that satisfy the tests for state action that apply in the Tenth Circuit. At best, the facts alleged by the plaintiffs simply show that each year the Forest Service routinely agrees to renew this authorization for the stipulated fee (usually several hundred thousand dollars each year), and this is not enough to be described as “state action.”