Affirming the district court, the U.S. Court of Appeals for the Ninth Circuit rejected 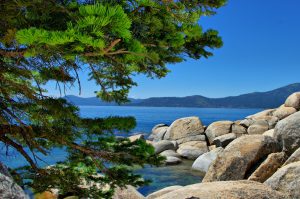 The RPU generally places stringent conditions on future development in the Lake Tahoe Region. The Ninth Circuit holds that “plaintiffs had standing and their claims were ripe” and,  “[t]he draft EIS drew criticisms that necessitated substantial revisions, but the final EIS for the RPU adequately addressed localized impacts on soil conservation and water quality;” and notes that both California and Nevada now support the RPU.

Congress approved the Compact in 1969. “In 1980, Congress therefore approved Compact amendments, requiring TRPA to adopt a Regional Plan, and barring any development exceeding environmental threshold carrying capacities.” “The Compact created TRPA to serve as a bi-state land use and environmental resource planning agency for the Lake Tahoe Region.” Its “governing board includes a California delegation and a Nevada delegation, with delegation members appointed by various state, county, and city entities.”

“Since TRPA is not a federal agency, the Compact, and not the Administrative Procedure Act (‘APA’), provides the applicable standard of review of TRPA actions.” But, that standard is in any case similar to the “arbitrary and capricious” standard of the APA, i.e., “Under the Compact, ‘judicial inquiry shall extend only to the questions of whether [TRPA’s legislative] act or decision has been arbitrary, capricious or lacking substantial evidentiary support or whether the agency has failed to proceed in a manner required by law.’” Compact art. VI(j)(5).

The Ninth Circuit also affirmed the district court’s award of costs against the plaintiffs for the TRPA’s preparation of the administrative record in this proceeding, and the Ninth Circuit intimates that the record, may be fairly extensive.