On March 7, the U.S. District Court for the District of Columbia issued a ruling denying a motion for a preliminary 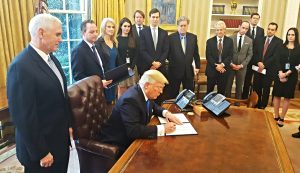 injunction filed by the Cheyenne River Sioux Tribe challenging an easement granted on February 8 by the U.S. Army Corps of Engineers to Dakota Access, LLC, the owners and operators of the Dakota Access Pipeline. It argued that the presence of oil in a pipeline constructed beneath Lake Oahe, a “federally regulated waterway that forms part of the Missouri River and straddles North and South Dakota,” will cause irreparable harm to its members’ religious beliefs in violation of the Religious Freedom Exercise Act (RFRA). According to the District Court, at the start of 2017, the Lake Oahe crossing is the only portion of the pipeline that is not finished. The case is Standing Rock Sioux Tribe and Cheyenne River Sioux Tribe v. U.S. Army Corps of Engineers.

On February 8, 2017, the Corps of Engineers notified Congress of its intent to issue the easement, and the next day the Cheyenne River Sioux Tribe filed its motion for preliminary injunction. The court determined that “because of the Plaintiff’s delay in raising this religious-exercise objection and the negative impact of that delay on the Corps and Dakota Access, the court concludes that the requested preliminary-injunctive relief is barred by laches.” In addition, the District Court found that the tribes were unlikely to establish that the “grant of this easement imposes a substantial burden on its religious exercise such that it will succeed on the merits of its RFRA claim.”

Photo:  Karl-Ludwig Poggemann, “Signing orders to move forward with the construction of the Keystone XL and Dakota Access pipelines in the Oval Office” – Creative Commons