The U.S. Court of Appeals for the Eighth Circuit has distinguished decisions from the Fifth and Tenth Circuit that appear, at first blush, to be in conflict with its ruling that the Interstate Commerce Commission Termination Act, 49 U.S.C. § 10501(b) (ICCTA), preempts state law negligence claims. In the case of Tubbs, et al., v. Surface Transportation Board, et al., decided on December 28, 2015, 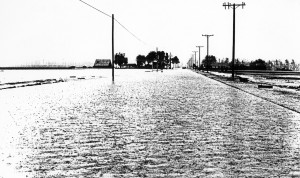 the Court of Appeals denied a petition to review an administrative decision of the Surface Transportation Board (STB) in which the STB held that the ICCTA, preempts the plaintiffs’ state-tort law claims against the BNSF Railway Company for damage caused by the flooding resulting from the railroad’s maintenance of an earthen embankment that bisects the Tubbses’ their property on which BNSF operates a railroad track. There appears to be room for further development of the Court of Appeals’ thinking on this topic.

The Tubbses’ sought the Court of Appeals’ review of two issues:  (1) Whether the Board’s unreasonable-burden-or-interference test is the appropriate test for determining if the Tubbses’ state-law claims are preempted under the ICCTA; and (2) Whether the facts support state-law claims that would unreasonably burden  or interfere with rail transportation. Upon review, the Court of Appeals sought to determine whether the STB’s decisions were “based on a permissible construction of the statute.”  In doing so, it noted that the STB’s unreasonable-burden-or-interference test is fact intensive, however, as long as the STB’s “findings of fact  are supported by substantial evidence in the record as a whole, we will accept its  findings and the reasonable inferences it drew from them.”

According to the plaintiffs’ complaint , their 550-acre farm was severely damaged by the flooding of their lands resulting from the railroad’s negligent maintenance of an earthen embankment that bisects their property. The Tubbses attribute the total loss of their farm to BNSF’s maintenance of a railway embankment running across their farm. The area was prone to flooding which could spill over the tracks, interrupting rail service. To avoid flooding, the railway raised the embankment. However, in 2011, massive floods breached the new embankment, and washed away the fertile soil of the plaintiffs’ farm land. The plaintiffs filed their claims in state court, but the court stayed those claims to give the plaintiffs the opportunity to have the STB rule on whether the ICCTA preempts their state law claims.

The Court of Appeals declined to overturn the STB’s use of the unreasonable-burden-or-interference test for as-applied preemption under the ICCTA because it concluded that the Tubbses have failed to properly challenge it. In part, it concluded that the Tubbses had “not established that they have no federal remedies remaining. Indeed, they embrace  the surviving tort claims that are ‘based on alleged violations by BNSF of [the Federal Railroad Safety Act] regulations.'”

The Court of Appeals otherwise concluded that the facts support the STB’s conclusion that the state-law claims that would unreasonably burden or interfere with rail transportation. The STB ruled that the federal law did in fact preempt these claims because they would have the effect of “managing or governing rail transportation,” resulting in an unreasonable burden or interference with rail transportation “because they are ‘based on alleged harms stemming directly from the actions of a rail carrier, BNSF, in designing, constructing, and maintaining an active rail line—actions that clearly are part of ‘transportation by rail carriers.'” The STB noted that if state-law claims directed at such an “integral part of . . . rail transportation” were not preempted, they would interfere with BNSF’s “ability to uniformly design, construct, maintain, and repair its railroad line.” In its decision, the STB distinguished Emerson v. Kansas City S. Ry. Co., 503 F.3d 1126, 1133 (10th Cir. 2007) (The Tenth Circuit held that “no ICCTA provision gives the [STB] authority to dictate how the Railroad should dispose of detritus or maintain drainage ditch vegetation. Nor would the state remedies adversely affect the economic aspects of the Railroad’s operations subject to [the STB’s] control.”) and Guild v. Kansas City Southern Railway Co., 541 F. App’x 362, 368 (5th Cir. 2013) (The Fifth Circuit held that a state law tort claim was not preempted because the railroad had not provided evidence in support of its “assertions that the [plaintiffs’] negligence claim would somehow affect  rail transportation.”). The STB also held that the Tubbses’ claims for violations of applicable federal rules were not preempted, but that they chose not to make this kind of argument.

The Court of Appeals concluded that the STB correctly distinguished both cases. With respect to Emerson, the Court of Appeals explained “[w]here Emerson dealt with the improper disposal of railroad ties and vegetation debris, this case deals with the structural standards applicable to an earthen embankment on which a railroad runs, standards that would have a significant impact on the construction and maintenance of a rail line.” In contrast, the Court of Appeals noted that, unlike in Guild, in this case, “[t]here is no similar lack of evidence” because the “Tubbses advance a standard of care that would, in essence, subject construction of elevated railroad embankments to state regulation for height, width, and drainage via negligence actions.”

The Court of Appeals ultimately confirmed that it would not overturn the STB’s factual determination that the Tubbses’ state-law claims would unreasonably burden or interfere with rail transportation because that determination is supported by substantial evidence in the record.