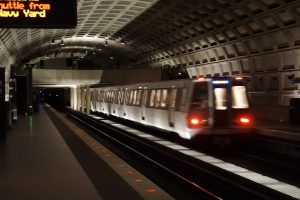 a Supplemental Environmental Impact Statement (SEIS) must be provided by the Federal Transit Administration (FTA) and the Maryland and local District of Columbia public transit officials regarding the planned expansion of the “Purple Line Project” into Maryland. The District Court considered whether FTA’s action was arbitrary and capricious, i.e., if it “relied on factors which Congress has not intended it to consider, entirely failed to consider an important aspect of  the problem, offered an explanation for a decision that runs counter to the evidence before the agency, or is so implausible that it could not be ascribed to a difference in view or the  product of agency expertise.” The case is Friends of the Capital Crescent Trail, et al., v. FTA.

Washington Metropolitan Area Transit Authority (WMATA) Metrorail, the local subway system, has been plagued by ridership and safety issues, and opponents to the costly expansion argued that NEPA requires that these issues be adequately addressed. The agencies have refused to provide this data and argued that an SEIS is not required, and moved for summary judgment with motions that the District Court held were untimely.

On August 3, 2016, the District Court granted partial summary judgment to plaintiffs and “found that the FTA’s conclusion that Metrorail’ s ridership and safety issues would have no effect on the Purple Line was arbitrary and capricious.”  The defendants filed motions asking the court to alter or amend its judgment. On November 22, 2016, the District Court amended its judgment to give the FTA the opportunity “to critically evaluate WMATA’s ridership and safety issues, and determine what level of additional [National Environmental Policy Act (NEPA)] analysis was required for the Purple Line.” Shortly thereafter, FTA notified the District Court “of its decision that an SEIS was not necessary,” and FTA and Maryland filed renewed cross-motions for summary judgment.

While the motions remain pending, the District Court found it “prudent to issue today my ruling on the overarching issue that has been the focus of this litigation since my opinion last November: the necessity of an SEIS addressing the potential impact of WMATA’s ridership and safety issues.”

According to the District Court

FTA boldly concluded that there is no need for an SEIS, and the Purple  Line will meet its established purposes, no matter what happens to WMATA Metrorail.  To say the least, this is a curious conclusion when one considers that one of the three  explicit purposes identified for the Purple Line was to ‘[p]rovide better connections toMetrorail services ….’ and given that FTA itself concedes that this purpose ‘is directly implicated by potential ridership declines in the WMATA Metrorail system.’

The District Court found that

[D]efendants have failed to take the requisite ‘hard look’ at the potential impact that WMATA’s ridership and safety issues could have on the Purple Line Project and conclude[d] that an SEIS that addresses these issues in fact required.

District Court found that “FTA failed to consider relevant information when making its decision not to prepare an SEIS.” And, “plaintiffs’ expert declarations, at a minimum, raise[d] serious questions about the defendants’ assumptions about WMATA Metrorail and its future impact on the Purple Line.” It noted that the fact that the agencyis entitled to its own discretion does not mean that it can disregard materials that were included in the administrative record on remand.”

An emergency appeal to the DC Circuit is pending.