On June 30, 2014, the US Court of Appeals for the Fifth Circuit reversed the lower court’s determination that the State of Texas’ administration of its water management authority under state law violated the Endangered Species Act (ESA) 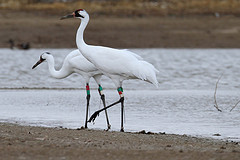 by “taking” whooping cranes, a protected species under the ESA, by failing to ensure that adequate supplies of freshwater flowed into the river serving the Aransas National Wildlife Refuge, located along the Texas coast. To remedy the situation, the lower court ordered the state officials to refrain from approving or granting new water permits until the State of Texas persuaded the court that such permits will not take whooping cranes in violation of the ESA. The case is The Aransas Project v. Shaw.

The appeals court held that the lower court utilized an erroneous standard of proof, in that it failed to follow the foreseeability and proximate cause requirements for ESA liability described in the 1995 Supreme Court decision in Babbitt, Secretary of the Interior v. Sweet Home Chapter of Communities for a Great Oregon. The case is significant because it describes the standard of proof that must be met in many ESA-taking cases when the link between a government action (usually a permitting decision) and the taking of a threatened or endangered species ~ the Fifth Circuit described the whooping crane as “a majestic bird that stands five feet tall and has a wingspan of more than eight feet” ~ must be established utilizing these proximate cause factors. In this case, the connection between permitting actions, the water usage of hundreds of licensed users and the impact of a historic drought was too remote to establish liability for the state. The appeals court also ruled that the injunction issued by the lower court was an abuse of discretion and must be reversed.

If you have any questions about the content of this blog, please contact the Pillsbury attorney with whom you regularly work or Anthony Cavender, the author of this blog.