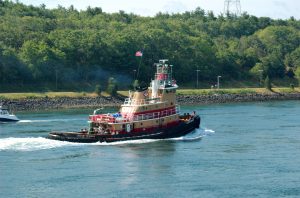 contracted crew’s actions caused a massive oil spill in the Mississippi River, cannot rely on the Oil Pollution Act’s (OPA) third party defenses to avoid paying the U.S. Government another $20 million to reimburse the government’s response costs, and otherwise it was not entitled to limited liability because of the nature of the conduct of the operator’s employees.

There is no dispute that the July 23, 2008 spill was caused by [DRD Towing Company’s (DRD)] wrongful conduct and regulatory violations, committed in the course of carrying out its contractual obligation to transport ACL’s fuel-filled barge. Accordingly, the spill was caused by the gross negligence, willful misconduct or regulatory violations of ‘a person acting pursuant to a contractual relationship with’ ACL, and ACL is therefore not entitled to limited liability.

ACL owns the tug boat, but it contracted with DRD to operate it. In 2008, the actions of DRD’s crew resulted in criminal convictions under the Clean Water Act (CWA) and the Ports and Waterways Safety Act (PWSA) as well as significant monetary damages. With respect to vessels, the “responsible party” is “any person owning, operating, or demise chartering the vessel.” ACL, as a responsible party, incurred approximately $70M in cleanup costs and damages for the nearly 300,000 gallon spill.  The U.S. also incurred approximately $20M in cleanup costs and damages.

In 2014, the U.S. Government later sued both DRD and ACL to recover these costs. Believing that it was without fault, ACL cited OPA’s third party defenses, which can absolve “responsible parties” of liability in some instances. OPA provides for a complete defense to liability under four enumerated circumstances:

To be entitled to rely on a third-party defense, the responsible party must also establish that it “exercised due care with respect to the oil concerned” and that it “took precautions against foreseeable acts or omissions” of the third party. The District Court determined that since DRD was a third party whose acts or omissions occurred “in connection with a contractual relationship,” ACL could not invoke the OPA’s third party defenses and ordered ACL to pay the U.S. Government $20M.

On appeal, the Fifth Circuit acknowledged that “[t]he meaning of § 2703(a)(3)’s ‘in connection with’ language is a question of first impression.”  It confirmed that

The Fifth Circuit went onto confirm

The legislative history shows that, in enacting OPA, Congress wanted not only to quickly contain and clean up spills, but also to prevent spills from occurring in the first place by using weighty financial consequences to encourage responsible parties to take all available precautionary measures. To give effect to that purpose, Congress intended to narrowly limit the third-party defense in order to ‘preclude defendants from avoiding liability by claiming a third party was responsible, when that third party had a contractual relationship with the defendant and was acting, in essence, as an extension of the defendant.’

The Fifth Circuit then held that “the third-party defense should not be available where a spill is caused by third-party acts or omissions that would not have occurred but for the contractual relationship between the third party and the responsible party.” It went onto hold that “the ‘pursuant to’ language [in OPA’s exception to the limited liability provision] is satisfied if the person who commits the gross negligence, willful misconduct, or regulatory violation does so in the course of carrying out the terms of the contractual relationship with the responsible party.” Finally, it held that ACL’s reliance on the doctrine of respondeat superior is [likewise] inapposite,” in part, because even “are liable for the intentional torts of their employees if committed by an employee ‘acting within the scope of their employment.'”