On September 13, the U.S. District Court for the District of North Dakota granted a Motion for a Temporary 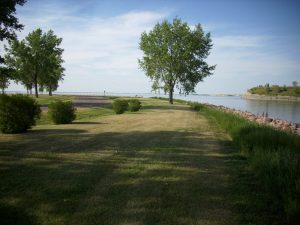 Restraining Order in the matter of Paradigm Energy Partners, LLC v. Fox, et al., prohibiting the defendants from interfering with the Paradigm’s construction of two pipelines (an oil and a natural gas pipeline) in McKenzie and Mountrail Counties, North Dakota.

The two pipelines will cross Lake Sakakawea by means of a tunnel beneath the lake, and transport oil and gas to a collection point in Mountrail County for delivery to interstate carriers. Lake Sakakawea is located within the Fort Berthold Indian Reservation, but as the court points out, the lake and the subsurface are owned by the United States. The mineral estate beneath the surface is held in trust for the Mandan, Hidatsa & Arikara Nation (the Nation) by the United States. To construct these pipelines, Paradigm needed several state and federal permits or authorizations, as well as easements and right-of-way agreements from private landowners and the Nation. The federal permits are issued by the Department of the Interior, Bureau of Indian Affairs (BIA) and the U.S. Army Corps of Engineers (Corps), and these permitting actions must comply with National Environmental Policy Act (NEPA).

According to the District Court, Paradigm obtained these permits and authorizations, and the overall project has been approved by federal and state regulators. The Corps granted an easement and right-of-way to Paradigm to construct the pipelines under Lake Sakakawea . In addition, Paradigm paid substantial sums to obtain these easements totaling nearly $ 1 million (which included a large sum paid to the Nation). Work began in March 2016, and the construction of the oil pipeline has been completed. However, in early August, Paradigm was served with an “Order to Cease and Desist” from the Nation, which asserts that the Nation’s consent to run the pipeline beneath Lake Sakakawea was never obtained.

This litigation followed and the District Court reviewed the evidence and conducted a hearing into Paradigm’s request for a restraining order against the Nation. The Motion was granted, as the court determined that the Nation improperly construed the applicable federal statute (25 U.S.C. Code §§ 323-324), and the equities favored Paradigm. The laws, which set forth the Nation’s right to grant consent to work on its lands only apply to those lands where the surface estate is owned by the Nation or Tribe, but this is not the case here.

Pipeline officials testified that, in their view, the unexpected opposition to the pipeline coincided with the “level of discontent” experienced by the Standing Rock Sioux Reservation with the nearby the Dakota Access Pipeline project. The defendants also argued that the District Court lacked jurisdiction to hear this case because the Nation, as a separate sovereign, was entitled to sovereign immunity, which has not been waived. The District Court , citing the 1908 Supreme Court ruling in Ex Parte Young, which allows suits against government officials in their capacity when they are acting beyond the scope of their authority, held that sovereign immunity did not apply here.