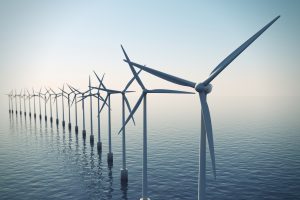 In a breakthrough for offshore wind energy in the United States, construction of the Block Island Wind Farm, the first U.S. offshore wind farm, was completed in August 2016 about 30 miles off the coast of Rhode Island. The project began delivering power to the New England grid on May 5 of this year. While Block Island is a big step forward for the industry, broad public support for offshore wind farms in the U.S. has been lacking due in large part to concerns about aesthetics when the turbines are visible from land. As demonstrated by the collapse of the Cape Wind project in 2014 off the coast of Martha’s Vineyard, failure to get public buy-in can be fatal to a project.

This may be about to change due to floating turbine technology that allows wind farms to be located in deep water, far offshore and not visible from land. The technology also addresses other common concerns relating to offshore wind projects by eliminating seafloor-disturbing pile-driving, and allowing for easy disassembly and removal when the project ends. It also means that wind turbines are possible in many locations, like off the West Coast, where deeper waters have made wind farms technologically infeasible or impossible using traditional foundations. A number of developers have put their floating turbine designs to the test through pilot programs presently being conducted in the U.S., Europe and Japan, and several additional test projects are in the final stages of development.

In the United States, the Department of Energy (DOE) has invested in a pilot program by the University of Maine to install a floating offshore wind farm in deep waters off the coast of Maine using turbines attached to concrete semi-submersible foundations. In Europe, several designs are being tested, including those based on decades-old oil and gas technology (spar buoy foundation, to the mooring lines, to the suction anchors).

Offshore wind energy in the U.S. is a largely untapped alternative energy resource that holds the potential to produce a large percentage of the nation’s energy needs. Offshore turbines can offer many advantages over those on land, including that the winds offshore tend to blow harder and more consistently, and also the turbines themselves can be larger and therefore generate more energy. According to a 2016 assessment by the DOE’s National Renewable Energy Laboratory, the technical resource potential for offshore wind development in the United States (taking into consideration technical, environmental and competing-use exclusions) is 2,058 GW of capacity, or 7,203 terawatt-hours per year of generation, which is nearly double the nation’s current annual electricity use.

California’s Quest for Renewable Energy
California’s Governor Brown signed a bill in 2015 mandating that the state obtain half of its energy from renewable resources by 2030. In 2016, Gov. Brown asked the Secretary of the Department of Interior for a joint task force to facilitate offshore renewable energy. Also in 2016, the DOE issued a joint national strategy with the Bureau of Ocean Energy Management (BOEM) for offshore wind development. With its governor’s outspoken support for renewable energy, and federal support through DOE and BOEM, California could soon be the site of the West Coast’s first offshore wind project.

Using floating wind turbine technology originally developed and tested in Europe, Seattle-based Trident Winds has proposed an offshore wind farm approximately 33 miles off the central California coast, called the Morro Bay Offshore project. The company has approached BOEM with its interest to secure a lease in the area, and other companies have likewise expressed interest in the region. If a commercial-scale project is completed, either by Trident Winds or another company, the energy produced by such a project could go a long way toward fulfilling the mandate set by Gov. Brown for renewable resource-derived energy, and provide a template for future floating turbine commercial projects.