At the age of 21, in 1861, Oliver Wendell Holmes, Jr. and many of his friends enlisted in the Massachusetts Infantry after the 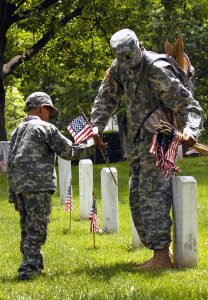 outbreak of the Civil War. He saw the worst of the war, and was nearly killed several times and suffered two grave wounds. By 1864, at the end of his enlistment, he had had his fill of it. Yet his experience left an indelible mark on him, as it did on most of his contemporaries, and he was grateful for the opportunity to serve his county in these great battles. Throughout his long life, he would recall where he was, on a day 50 or 60 years before, when the anniversaries of such battles as Balls Bluff and Antietam triggered his memories.

The deeper significance of Memorial Day to Justice Holmes, and indeed for many Civil War veterans on both sides, is reflected in two remarkable Memorial Day addresses he gave. In 1884, he delivered the Memorial Day Oration in Keene, New Hampshire, In Our Youth Our Hearts Were Touched With Fire, where he noted that “the generation that carried in the war has been set apart by its experience. Through our great fortune, in our youth, our hearts were touched with fire.” In 1895, he addressed the graduating class of Harvard College in a speech that is known simply as The Soldier’s Faith. He once more described for his audience the agonizing experience of war, yet “we still believe that love of country is not yet an idle name.” His concluding words are remembered in this extract.

Justice Holmes is buried with his wife in the Arlington National Cemetery. His gravestone lists first his military service, “Captain and Brevet Colonel, 20th Massachusetts Voluntary Infantry,” and then his long service on the U.S. Supreme Court. He and his wife had no children; his residuary estate was left to the United States of America.