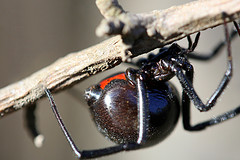 Nothing strikes fear in a person like a black widow spider sighting, in part, because its venom is reportedly 15 times that of a rattlesnake’s. Although most bite victims do not suffer serious damage (except that children, elderly, and physically infirm individuals are at greater risk for serious injury), a bite should not be ignored.

Black widow spiders are nocturnal and, thus, are active at night. However, be alert, they like outdoor areas (e.g., woodpiles, rubble piles, under rocks, hollow stumps, and rodent burrows, privies, sheds and garages) as well as some indoor areas (e.g., undisturbed, cluttered areas in basements and crawl spaces). Wear a long-sleeved shirt, hat, gloves, and boots when in areas prone to black widow spiders. Also inspect and shake out clothing and shoes before getting dressed, and consider using insect repellants on clothing and footwear.