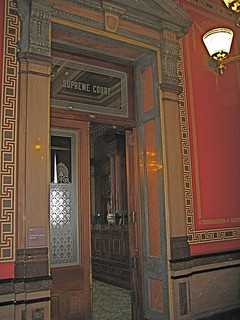 in Star Equipment, Ltd., v. State of Iowa, Iowa Department of Transportation, Case No. 12-1378 (Jan. 31, 2014), reversed the district court’s ruling on the scope of remedies available to subcontractors under Iowa Code § 573.2 for unpaid work. For the state projects, the Iowa Department of Transportation (IDOT) had waived the requirement of a construction surety bond because the general contractor qualified as a Targeted Small Business (TSB). Ruling in favor of the subcontractors, the Court construed Section 573.2 “as a waiver of sovereign immunity that allows subcontractors to recover from IDOT the unpaid balances TSBs owe for work on public improvements.” It went on to rule that the subcontractors, as prevailing parties, are eligible, in the district court’s discretion, to recover their reasonable attorneys’ fees from IDOT.

The Public Projects
In 2010, IDOT hired Universal Concrete, Ltd. as the general contractor for improvements to rest areas along Interstate 80 in Adair County. Universal Concrete qualified as a TSB. Iowa Code § 15.102 defines TSB as “a small business which is fifty-one percent or more owned, operated, and actively managed by one or more women, minority persons, or persons with a disability provided the business meets all of the following requirements: (1) Is located in this state. (2) Is operated for profit. (3) Has an annual gross income of less than four million dollars computed as an average of the three preceding fiscal years.” Because Universal Concrete was a TSB, IDOT waived the construction surety bond requirement, as permitted by Iowa Code § 12.44.

The Claims Against IDOT
Star Equipment, Manatt’s, and Short’s Concrete filed claims in the amount of $10,851.44, $15,685.55, and $5,775, respectively, with Universal Concrete and IDOT, seeking the balances owing for their materials and work. On October 13, 2011, Star Equipment filed a civil action against Universal Concrete and IDOT, as well as against Manatt’s and Short’s Concrete (to adjudicate their competing interests in the funds retained by IDOT). Each of the subcontractors contended Iowa Code § 573.2 imposes liability on IDOT for the amount that their claims exceeded the retained funds. IDOT agreed that the subcontractors were entitled to payment from the retained fund. It denied, however, the subcontractors’ claims that exceeded the retainage.

The District Court’s Order Limited the Claims to IDOT’s Retainage
On January 20, 2012, it granted IDOT’s motion to dismiss the subcontractors’ claims to the extent they exceeded the retained funds. It concluded that, “in the absence of a bond, the subcontractors’ remedy against the state is limited to the funds the Iowa Department of Transportation (IDOT) retained on its contract with the TSB.” On July 3, 2012, the district court awarded all of the retained funds to Manatt’s because it had filed its IDOT claim first. (The district court entered additional orders in favor of the subcontractors against Universal Concrete. The subcontractors’ default judgments against Universal Concrete remain unsatisfied.) Manatt’s and Short’s Concrete filed a joint appeal and Star Equipment filed a separate appeal, appeals that were later consolidated, seeking IDOT’s payment of their claims and attorneys’ fees.

The Iowa Supreme Court’s Reversal of the District Court’s Order
The Court recognized that Star Equipment, Ltd. presented questions of first impression on the meaning and constitutionality of Section 573.2, a statute governing “subcontractors’ remedies for unpaid work on public improvements when the state waives the performance bond for a general contractor that is a “Targeted Small Business” (TSB).”

Because mechanic’s liens do not attach to government-owned facilities, Chapter 573 of the Iowa code was enacted “to provide other protections to secure payment for those working on public improvements.” Section 573.2 states, in relevant part:

Contracts for the construction of a public improvement shall, when the contract price equals or exceeds twenty-five thousand dollars, be accompanied by a bond, with surety, conditioned for the faithful performance of the contract, and for the fulfillment of other requirements as provided by law….

If the requirement for a bond is waived pursuant to [Iowa Code] § 12.44, a person, firm, or corporation, having a contract with the [TSB] or with subcontractors of the [TSB], for labor performed or materials furnished, in the performance of the contract on account of which the bond was waived, is entitled to any remedy provided under [Chapter 573]. When a bond has been waived pursuant to [Iowa Code] § 12.44, the remedies provided for under this paragraph are available in an action against the public corporation.

Typically, subcontractors on public improvements left unpaid by the general contractor would be able to collect from funds retained by the state or through claims against a surety bond, as contemplated by Iowa Code §§ 573.16, 573.18, 573.22. In the instant case, the retained funds were insufficient and IDOT had waived the bond because of Universal Concrete’s status as a TSB.

The Court, analyzing Chapter 573, summarized that:

“Chapter 573 provides an additional protection for subcontractors in the form of a retained percentage fund. Section 573.12(1) requires the state entity, or “public corporation,” in charge of the project to pay the general contractor monthly. Iowa Code § 573.12(1). From the amount payable to the general contractor, the public corporation is allowed–but not required–to retain up to five percent of the amount owed. See id. Section 573.13 specifies that the retained amount “constitutes a fund for the payment of claims for materials furnished and labor performed.” [Iowa Code] § 573.15 (providing under what circumstances the retained amounts may be used to pay those who have furnished materials).

It next analyzed the legislative history of Chapter 573 — entitled “Labor and Material on Public Improvements.” It found that this chapter was intended to protect “subcontractors and materialmen through retainage procedures and by requiring general contractors to obtain surety bonds for state government construction projects,” citing Iowa Supply Co. v. Grooms & Co. Constr., Inc., 428 N.W.2d 662, 665-66 (Iowa 1988). It went on to conclude that the subcontractors’ argument that the second paragraph of Section 573.2 entitles them to collect from IDOT the amounts owed by the TSB because the bond requirement had been waived and the retainage was insufficient to “fit[] with the plain text of the statute and with the legislative explanation accompanying the statutory amendment adding this provision.” This interpretation is consistent with the further purpose of Chapter 573 “to protect subcontractors and materialmen against nonpayment,” citing Farmers Coop. Co. v. DeCoster, 528 N.W.2d 536, 537 (Iowa 1995), and the “specific purpose of the 1988 amendment to section 573.2 is to extend protections for subcontractors when the bond is waived for a TSB.”

It found that IDOT’s interpretation of Chapter 573 “would undermine both goals.” It further disagreed with IDOT’s challenge that Section 573.2, so interpreted, is unconstitutional under article VII, section 1 of the Iowa Constitution. It found that “[t]he evils sought to be avoided by article VII, section 1 are not present here. IDOT has assumed liability for its own benefit–improvements to state-owned facilities.” “Article VII, section 1 does not prohibit the state from paying the subcontractors after the TSB’s default. That statute puts IDOT in the position of a coprincipal, not a surety, with its TSB, Universal Concrete.”

In summary, it held that “Section 573.2 permits the subcontractors to recover from IDOT amounts they could have recovered from the surety if IDOT had not waived the bond.” Section 573.2 “constitutes the state’s express consent to be sued,” citing Anthony v. State, 632 N.W.2d 897, 902 (Iowa 2001). It further confirmed that “the subcontractors, as prevailing parties, are eligible, in the district court’s discretion, to recover their reasonable attorney fees from IDOT, including fees incurred obtaining the default judgments against Universal Concrete and the additional fees incurred litigating against IDOT in district court and on appeal.” It remanded the matter to the district court to determine whether the subcontractors should be awarded their attorney fees and, if so, to calculate the amount of the award for each subcontractor.