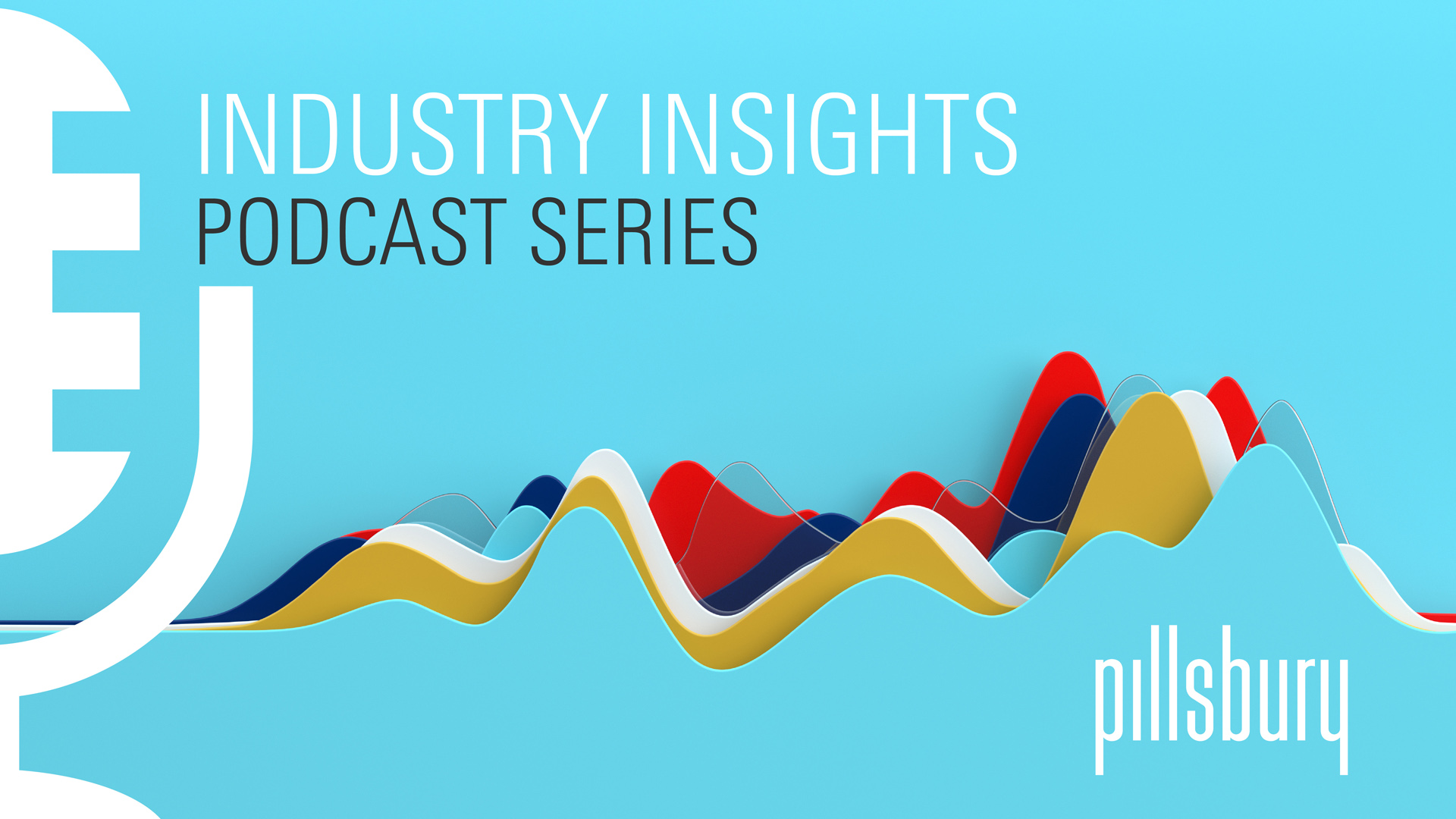 In episode #26 of Industry Insights podcast, Steve Hamilton joins host Joel Simon to discuss certain segments of the real estate market and related financing that remained robust in the midst of the pandemic.

Joel Simon: I’d like to kick off our discussion today with some optimism. We all know the real estate sector took a beating during the least year or so, but it wasn’t all doom and gloom. In particular, you remain pretty busy in certain segments of the real estate finance market, primarily for lenders but including on a borrower-side transaction in November that at the time was the largest hotel sale in financing since the onset of COVID-19 in the first quarter of 2020. Can you tell us about your experience in some of these flourishing areas of the real estate market?

Steve Hamilton: Sure. As we know, 2020 was a little bit of a dumpster fire for the real estate industry, but there were some highlights and there were some areas that did flourish. We saw a lot of activity, at least in the construction loan sector of what I do, involving industrial buildings and warehouses for distribution centers. We saw a number of retail projects which ordinarily folks would think were struggling during stay-at-home orders, during COVID, but some developers and retailers actually found opportunities there. An example—in a number of shopping centers where you had the likes of Toys-R-Us and other bankrupt companies, there was space that was available and you saw Amazon, for example, come in pretty hard in the last half of the year rebranding those shopping centers or those stores with places like their four-star stores where they bring products direct to consumers. Rather than having them delivered to their front door they’d put some of the hottest items that are trending on their web-based portals into brick-and-mortar where people want immediate gratification. They want to pick it up. They can’t wait a day or two for Prime. They want to go get it now. And they’ve gone in beyond Whole Foods. There are now Amazon-themed grocery stores. So that was kind of a new thing that we saw—not just construction loans but a retooling of existing retail centers around this marquis product because the one thing that lenders definitely like is consistency. What we saw during the pandemic was there are certain retail establishments that folks need regardless of what’s going on. Grocery stores and the Targets of the world are the kinds of shops that folks still need to go to once or twice a week to pick up the essentials. So any retail centers that are anchored by a grocery store—those are super-great credit for the lenders and they flock to those.

You mentioned the financing for the hotel up in Orange County I was involved in. That was an opportunity that one of our borrowers had to buy a marquis product at a discount because the hotel had been shuttered for some time or was at least under limited use, and with the right management and vision, they see that product or property as being a boon, that they’re going to redevelop it and it’s going to be a marquis hotel in the near future when they finish their improvements. So there are some bright spots out there if you look hard enough; you just need to find the right sponsors doing the right type of development. These large industrial buildings that are being used for distribution centers for the likes of Amazon ports and such—that’s definitely something that the lenders are looking for, and we did quite a few loans in the second half of last year and the beginning part of 2021 for those types of products.

Simon: Those are certainly significant contrasts to other subsectors in real estate such as mom-and-pop retail, certain big box stores, and strip malls which have taken big hits. I know there’s also been a market and demographic shift caused by, or accelerated by, the pandemic—creating opportunities for new home building as well as for apartments and mid-sized and smaller cities in certain parts of the country. What can you tell us about these opportunities?

Hamilton: That’s the other thing that was a little surprising in the latter half of 2020 and now into 2021—there is a booming apartment market out there. Lots of developers and lenders alike are developing brand new turnkey, high-end apartments, many in what we call secondary cities or outside of the primary urban areas. We have closed on multiple apartment loans in the last six months where you have millennials who are fleeing the big cities. With COVID, they are not tied to the large urban centers that they were when they had to commute into work every day, so you’ve seen a movement where these apartment projects—especially in the western states where I primarily do my deals—they’ve become very attractive. In addition, I’ve seen a number of new subdivisions popping up and subdivision loans. The housing market is very hot. You have folks, again, fleeing from the urban centers and looking for a home to themselves where they’re not sharing an elevator or common amenities with folks and they want to space out. They want a home that has a third bedroom or a fourth bedroom or a fifth bedroom or whatever it may be to be used as a home office. So we’ve seen a number of new subdivision loans come online in the last six months, and anyone who has monitored home prices during the pandemic, it definitely does not track the doom and gloom that people have predicted. In fact, at least here in the West and I think in other major metropolitan areas, the housing market is going crazy. The prices keep going up and up, and with that the money follows and the developers are moving that direction. Lenders see that there is this flight to the suburbs and the values are there, and the lenders will always loan where the value is. I see that process continuing now that the genie is out of the bottle—many folks are used to working from home and are going to continue to want to do that. Having that home office and more space to breathe in is definitely something that folks will be looking for.

Simon: I’d like to go back to something you mentioned earlier regarding large distribution centers, warehouses, and port cities or transportation hubs. I guess companies are able to look at those as a means of lowering operating expenses if they can take advantage of the market in that way, and it sounds like a potential win for certain areas that need to shore up their tax base as well as provide jobs and attract new residents. I’m thinking of East Coast port cities such as Boston, Mass., Bridgeport and New Haven in Connecticut, Newark, N.J., as well as Baltimore, Md. What are your thoughts on that area of growth?

Hamilton: Absolutely, I agree with you. I would add Jacksonville, Florida to that list. The port of Jacksonville has been expanding over the last decade, and the surrounding areas in Jacksonville which is the biggest metropolitan area within the United States, has grown exponentially during that time, so there are definitely opportunities there. As the e-commerce world expands, the distribution centers are becoming more and more important for those e-retailers. They want to be able to have their product off the ship and in a distribution center and quickly to the end user so that they can meet their one-day shipping or two-day shipping or in some instances six-hour shipping, and so having proximity to ports—whether it be Jacksonville, New Haven, Long Beach—having proximity to both those ports and to major distribution hubs and the highway system is going to be critical. and the Biden administration is pledging two trillion dollars. That’s going to be a huge amount of money going toward ports and bridges and expanding what is already there and making it modern, and I think that the banks are going to follow that. If the developers are building warehouse facilities, cold storage, what have you, to serve those e-retailers, the lenders will follow and they love to see credit when if you’ve got the Amazons or the Wal-Marts of the world putting in distribution centers—that is blue chip. That’s gold star. The lenders follow that. The developers seek those tenants out, and I definitely see those port areas being further redeveloped and moving toward a future where there will be more and more distribution centers in those areas in order to meet the needs of the customers who now have a somewhat insatiable desire to have things delivered in a moment’s notice. I definitely see that trend continuing post-COVID.

Simon: Well it sounds like we have a topic for a future episode—the tie-in of real estate and infrastructure. Thanks so much for this look at some of the bright spots in what was an otherwise gloomy season for new real estate projects and financing. It’s been great chatting with you today.