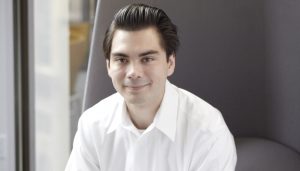 Ryley Poblete is a Senior Designer with global design and architecture firm Gensler, having spent the better part of the last decade working in the company’s Sciences Practice developing a portfolio of work centered around life sciences. An avid runner, urbanist, photographer, artist and policy enthusiast, Ryley can be found, in his spare time, “reading the newest Economist or digging into a project’s context to really define a new piece of architecture in the cities” in which he works. Asked how he’d describe his job to a layperson, Ryley adds, “I work with developers and biotech clients in planning and structuring developments to best suit their situation.”

Tell us about an interesting project you are working on.

Poblete: Over the past year and a half, I have been working on a project known as the Fenway Center life science campus. It is a 22-story, nearly one-million-square-foot development over the Massachusetts Turnpike. It will be one of the largest new air rights projects in the Boston area of the last 40 years. The project is for our clients IQHQ and Meredith Management. Meredith Management has been working on this project for 20 years, building the capital and the first phase of the project. When the second phase came around, IQHQ brought in the capital to really take the development to the next level. The Principals in our Boston office developed a great relationship with our partners at IQHQ, and this has led to a portfolio of projects that are defining this current wave of life science investment across the country. The Fenway Center project will have one of the largest automated garage systems in the country and will be paired with a park that will be named Life Science Park: A Monument to Life Sciences and Public Health. The state-of-the-art life science campus will anchor a research, academic and medical district between Kenmore Square and the Longwood Medical and Academic Area, one of our nation’s premier research and treatment centers.

What is your proudest professional moment?

Poblete: My proudest professional moment has to be achieving a permit for our clients for the deck that will support the Fenway Center project in Boston. Being that it is such a massive air rights project and one of Boston’s largest air rights projects since the Big Dig, it’s an amazing team win all around. The efforts that have gone into achieving this project from the ownership team and our collective design team have really been game changing. Second to that was achieving approval for the Fenway Center project to move forward by the BPDA and the BCDC. If you have worked in Boston, it’s a pretty awesome day when you get that vote of approval.

When outside of work, how do you unwind?

Poblete: Running is the ultimate form of “zoning out” for me. I’ll often either start my day or end it with running. Also, for the longest time, I played soccer competitively—I only stopped due to schedules in University—but I still love a great game.

Before we let you go, tell us something you consider key to your job.

Poblete: Obsession is often seen as a negative, but when it comes to adding a new piece of architecture into the city, obsession and focus is key.