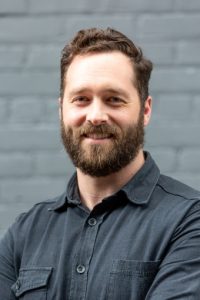 Drew DeWalt is COO of Rhumbix, a construction computer software company he co-founded with CEO Zach Scheel in 2014. A native of Waco, Texas, Drew attended the University of Notre Dame, and upon graduation, was commissioned into the U.S. Navy as a Nuclear Submarine Officer. He spent over six years with the Navy, stationed primarily in Pearl Harbor, Hawaii, and deployed to locations across Southeast Asia.After completing his service, Drew enrolled in Stanford’s Graduate School of Business to pursue a joint MBA/MPP degree program, focusing on energy systems and infrastructure. Shortly after graduating, he started the renewable energy company, Valhalla Energia, in Chile with two classmates. In 2014, Drew stepped back from Valhalla Energia to found Rhumbix with Zach Scheel. Their experiences working on mega infrastructure projects and feeling the pain of having to make important decisions with low-quality, latent and incomplete data led them to identify a need to gather and structure data at the source—from the men and women actually executing in the field on a project. Drew currently lives in Orinda, Calif., with his wife, Whitney, and their four children.

How do you describe your role to people who are not in the industry?

DeWalt: Rhumbix replaces all of a construction foremen’s workflows with a mobile smartphone app that collects a variety of information in real-time: timecards, installed production quantities, out of scope work, delays, safety hazards, etc. This information is immediately viewable through the Rhumbix web portal by project managers, administrators and field supervisors. The data is both analyzed by our labor productivity platform, which provides visibility into budget vs. actual performance on a daily basis, and also routed to myriad backend systems like payroll, accounting and ERP softwares. Better data, faster for better visibility and decision making at both the project and the corporate levels.

Tell us something interesting about your company project you are working on.

DeWalt: Rhumbix is a veteran-owned company. I was a submarine officer, and Zach was a civil engineer officer. We used advanced mobile systems in the military to provide intelligence, surveillance and reconnaissance of the battlefield. With Rhumbix, we wanted to build a smartphone-based platform that provided the same level of visibility into construction operations to improve the safety and efficiency of jobsites. We also knew that the most valuable resources in any organization are the men and women on the front lines with boots on the ground doing the work, so we had to tap into that experience and expertise in order to drive the advancement in the construction industry that we knew it needed.

What is your proudest professional moment?

DeWalt: Rhumbix’s focus on creating an exceptional company culture is a continuous source of pride. We’re here to put workers first, those on the construction site, and our own people who work with me at Rhumbix. We based part of our company’s mission on the Navy essay, A Message to Garcia. Set during the Spanish-American war, this true story is based on a soldier’s courageous and unrelenting spirit that helps get his job done. At Rhumbix, we live this adage by hiring people we can trust, cultivating a shared realization and empowering our people to take action. My proudest moments are when my people continue to trust me with their careers and do their best work in service of this massively important industry.

What do you do to unwind when you are not working?

DeWalt: When I’m not working, I’m spending time with my growing family and our new dog, Ruthie. More recently, I’ve gotten into woodworking—I’ve built several chairs and a few large picture frames. Next up is figuring out how to do some amateur coopering.