Balancing the interests of the Federal Government as owner of thousands of acres surrounding Crooked Lake and private owners’ rights, on July 26, 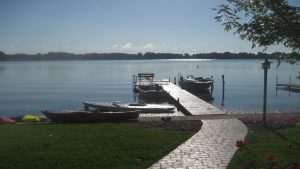 in a 2 to 1 ruling, the U.S. Court of Appeals for the Sixth Circuit ruled that the U.S. Forest Service exceeded its authority when issuing rules restricting recreational use of Crooked Lake. The federal legislation acquiring the property for the Federal Government contained a provision protecting “valid existing rights.” According to the Court of Appeals, relevant Michigan law established such an existing right, granting owners of property surrounding the lake the right to reasonable use of the lake, and this law must be respected. The case is Herr v. U.S.  Forest Service, et al.

The Court of Appeals notes that most of Crooked Lake is located within the federally-owned Sylvania Wilderness, which was the subject of the Michigan Wilderness Act of 1987. These lands were dedicated to the National Wilderness Preservation System, albeit subject to valid existing rights, and the U.S. Forest Service (Service) is authorized to preserve the wilderness character of the land. While 95  percent of the land surrounding Crooked Lake is federally protected, five percent belongs to private landowners subject to Michigan law, including Michigan’s riparian-rights law. A 1992 amendment to the management plan for the Ottawa National Forest placed severe restrictions on the plaintiffs’ use of gas-powered motor boats on the federal waters, and these restrictions were challenged (Amendment No. 1).

In 1993, several landowners filed a lawsuit challenging the prohibitions, “ominously referred to as Stupak-Thrall I.” Stupak-Thrall I ended in a victory for the Service. The en banc court, by an equally divided vote, affirmed the U.S. District Court’s decision to uphold Amendment No. 1, allowing the sailboat and houseboat restrictions to remain but leaving no controlling law in its wake. In 1995, the Service issued another amendment to its plans for Crooked Lake, prohibiting, among other things the use of “any motor or mechanical device capable of propelling a watercraft by any means” on the wilderness portion of Crooked Lake  (Amendment No. 5); this amendment included an exception for “one electric motor no great than 24 volts in size or 48 pounds of thrust.”

The Service incorporated these restrictions in the 2006 Forest Plan and a subsequent 2007 Forest Order, which subjected violators of Amendment No. 5 to criminal liability. A second lawsuit was filed. This time, the District Court

held that the motorboat restrictions interfered with Thrall’s ‘valid existing right’ to use gas motor boats on Crooked Lake’ and thus fell outside the Forest Service’s regulatory authority.  It also held that Amendment No. 5, as applied to Thrall and the Gajewskis, effected a regulatory taking under the Fifth Amendment.

In 2010, the plaintiffs purchased two waterfront lots on the lake’s northern bay with “the intention of using gas-powered motorboats.  The seller confirmed these intentions, telling the Herrs that he had used motorboats in the past ‘without hindrance by the Forest Service.'” And, for a time, the Service

not only allowed such use at the time but facilitated it for them and others. It regularly sold boating permits to visitors and residents—allowing them access to the lake—and allowed motorboat use through its public boat landing, located in a federally-owned portion of the northern bay just outside the wilderness area.

It stopped offering motorboat access at the landing dock and sent a letter to the Herrs informing them that it planned to ‘fully enforce’ the existing motor boat restrictions on the federal wilderness portion of the lake, though not the private portion of the lake.

The Herrs sued the Service under the Administrative Procedure Act (APA), seeking to enjoin it from enforcing the motorboat restrictions against them. At the Service’s “urging,” the District Court dismissed the case, holding that “the federal courts lacked subject matter jurisdiction over the dispute because the statute of limitations had run on any APA challenges to the 2007 Forest Order.”

On appeal, the Court of Appeals reversed the District Court, finding that “the limitations period, we explained, amounted to a claims-processing rule and did not create a limit on our subject matter jurisdiction. The limitations period had not lapsed anyway,… added, because the Herrs never had an opportunity to challenge the validity of the rule’s application to them until 2010, when they bought the land, and the Service had not enforced Amendment No. 5 against them until 2013.”  On remand, the District Court ruled for the Service again, “this time on the merits,” finding that “the Herrs’ rights to use Crooked Lake did not ‘exist’ at the time of the Michigan Wilderness Act’s enactment, meaning that the reservation of ‘valid existing rights’ did not apply to them.”

In its July 26 decision, the Court of Appeals set forth several background principles

Under Michigan law, a littoral landowner owns the rights to the bed of any inland lake, like Crooked Lake, ‘to the thread or midpoint of the water.’ But littoral landowners also share a right to the reasonable use of the water’s full surface. That means the surface of Crooked Lake, even the part in the Sylvania Wilderness, does not belong exclusively to the federal government. So too of the surface of Crooked Lake outside the Sylvania Wilderness; it does not belong exclusively to the State or the private property owners. The surface belongs jointly to the federal government and the private owners of state land on Crooked Lake, both of which maintain a littoral right to ‘reasonable use’ of the lake’s surface.

It then addressed whether the Service’s “ban on using any motorboats or any other boat that exceeds five miles per hour violate the ‘[1] subject to [2] valid existing [3] rights’ clause of the Michigan Wilderness Act?”  It conclude that, “[y]es, as an examination of each part of the clause confirms.” It confirmed that “[t]o the extent the Herrs have the right to use a motorboat under Michigan law on Crooked Lake, the Forest Service must honor that right—must in short be ‘subject to’ it.” It did caution that

That does not mean the Herrs have a right to use any size boat at any speed on any part of the lake, as the district court worried. The Herrs have a right to reasonable use of the lake. That means a right to travel at reasonable speeds within the lake. But the Forest Service has not shown that it would be unreasonable under Michigan law to travel on 95% of the lake above a low-wake-zone speed. If you think otherwise, try being at one end of a three-mile lake with a five-mile-an-hour speed limit as an unexpected storm sets in.

The Court of Appeals went on to suggest that

All of this does not leave the Forest Service or the Herrs’ neighbors without options. Fellow riparians may enjoin unreasonable uses under state law through the state and federal courts. They may petition the State of Michigan to change the boating rules on the surface of Crooked Lake. Or they may pay the Herrs for an easement on their property, which would limit motorboat use in the same way the Gajewskis’ property became limited. Even the serenity of nature sometimes comes at a price.

For these reasons, the Court of Appeals reversed the District Court’s ruling.