On August 17, 2016, the Fourth District Court of Appeals sitting in San Antonio held, in a 2 to 1 decision, that a City of 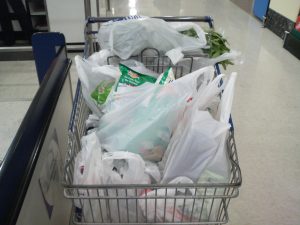 Laredo ordinance prohibiting the distribution of “single use” plastic bags at check-out counters in order to reduce litter was preempted by state law, namely, Section 361.0961 of the Texas Solid Waste Disposal Act (SWDA). The case is Laredo Merchants Association v. City of Laredo, and it could be important for many Texas cities coping with solid waste management issues.

Section 361.0961 of the SWDA, enacted in 1993, is entitled “Restrictions on Authority of Local Government or Other Political Subdivision,” and provides that no local ordinance shall prohibit or restrict, for solid waste management purposes, the sale or use of a container or package in a manner not authorized by state law. The City of Laredo is a home rule city, and as such it possesses “broad discretionary powers of self-government,” unless the Texas Legislature has expressly placed limits on these powers. Texas home rule cities cannot enact an ordinance that contains a provision that conflicts with the Texas Constitution or the general laws of the state of Texas. A local merchants association challenged City of Laredo Ordinance No. 2014-O-064, codified at section 33-455 of the Laredo City Code of Ordinances, but the trial court granted summary judgment to the City of Laredo, and this appeal followed.

This case was decided a few months after the Texas Supreme Court held in BCCA Appeal Group, Inc., v. City of Houston that a City of Houston air quality ordinance was largely preempted by the Texas Clean Air Act (CAA) and the enforcement powers granted by the Texas CAA to the Texas Commission on Environmental Quality. In the instant case, the Court of Appeals held that Section 361.0961 “unmistakably expresses the Legislature’s decision to preempt any ordinance that prohibits the sale or use of a container for solid waste management purposes,” and that plastic bags are a type of container or package as those terms are commonly used. Also, the City of Laredo wanted to reduce the generation of solid waste produced by the litter contained in discarded plastic bags, which is clearly covered by the statute. Accordingly, the lower court was reversed, and the case was remanded to the lower court to consider the plaintiffs’ request for attorneys’ fees from the City of Laredo.

The dissent argued that these two laws could construed in such a way that there were no conflicts between them requiring preemption. The City of Laredo ’s ordinance could be viewed as being in harmony with the general scope and purposes of the Texas SWDA as it promotes the reduction of the sources of solid waste.